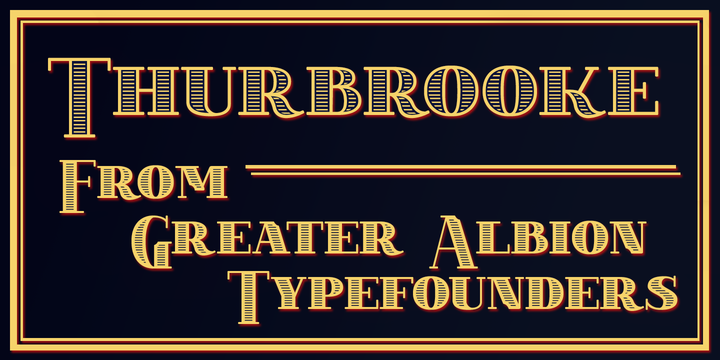 What is the Thurbrooke™ font?

Thurbrooke is an early 20th century inspired display family, offering two sizes of Roman capitals. Five typefaces are offered in the Thurbrooke family. The Regular face is shaded in horizontally engraved lines and suggests something of vintage advertising captions. A reversed ‘Reverso’ face, transposing black and white space is offered, as is a ‘Black’ face with solid letterforms. The remaining two faces are a bit more specialised. Thurbrooke ‘Banner’ is the latest in our popular line of masthead or cartouche faces-very impressive for banner headings. Thurbrooke Initials is a set of initial capitals, which blend in perfectly with Thurbrooke Reverso, or which also make splendid drop capitals. Why not explore some (or all) of the elements of the Thurbrooke family today, and introduce some early 20th century inspired colour to your work?

Here is a preview of how Thurbrooke™ will look. For more previews using your own text as an example, click here.

No,Thurbrooke™ is not free to download. You will need to pay for it I'm afraid. Almost every font that we list on HighFonts.com is a paid-for, premium font. We do have a Free Fonts section where we list free fonts that you can download. There is no point trying to find a free download of Thurbrooke™ so please don't waste your time looking.

It is highly unlikely that you'll be able to find Thurbrooke™ for free. There's a lot of websites that will say "Free Download" but these are just attempts to get you to click on a link which will either take you to an ad landing page or you risk getting viruses on your computer. In the rare occasion that you do find a free download for Thurbrooke™ remember that it's illegal to use a font if you didn't pay for it!

If you really want Thurbrooke™ and you want to truly own it the legal and safe way, then click here to visit the download and purchase page on MyFonts.com. Here you will be able to obtain the proper license. The designer and publisher deserves to be paid for their work, as they have put in the hours and the creativity to produce such an amazing font. Good luck with your purchase and future use of this font. :)