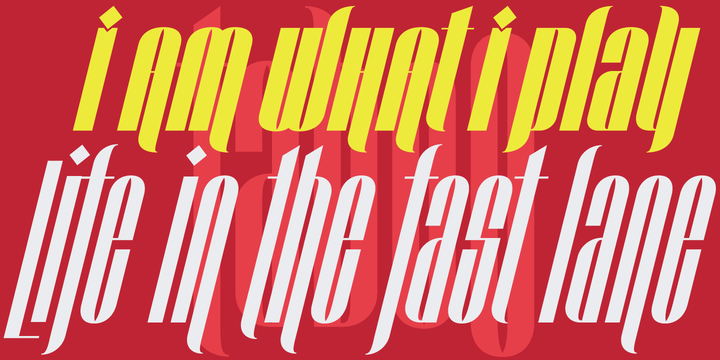 What is the Taboo™ font?

Taboo is a versatile font family inspired by the magnificent geometric experiments made by Armenian lettering artist Fred Africkian during the late 1970s. Virtually unknown in the west, Africkian was one of the most talented eastern block artists. Though mainly a calligrapher working with traditional tools, he embraced geometry on multiple occasions for the sake of drawing simple modern Armenian and Cyrillic alphabets. Though he normally tried to maintain in his work a certain homage to Mesrop Mashtots (5th century Armenian monk who invented the Armenian alphabet), his late 1970s experiments made use of so many modern elements that the results were hailed as “real art mingled with science.” More…
The principal idea behind the Taboo family is simple geometry of constant counter space and identical horizontals, with the verticals serving as the main index of weight and width. The forms inflate geometrically, but their core remains unchanged. The applications of such interchanging abilities are limitless. Add to that a few on- demand decorative elements, and science becomes art.

Here is a preview of how Taboo™ will look. For more previews using your own text as an example, click here.


Is Taboo™ A free font? Is Taboo™ Free to Download?

No,Taboo™ is not free to download. You will need to pay for it I'm afraid. Almost every font that we list on HighFonts.com is a paid-for, premium font. We do have a Free Fonts section where we list free fonts that you can download. There is no point trying to find a free download of Taboo™ so please don't waste your time looking.

It is highly unlikely that you'll be able to find Taboo™ for free. There's a lot of websites that will say "Free Download" but these are just attempts to get you to click on a link which will either take you to an ad landing page or you risk getting viruses on your computer. In the rare occasion that you do find a free download for Taboo™ remember that it's illegal to use a font if you didn't pay for it!

If you really want Taboo™ and you want to truly own it the legal and safe way, then click here to visit the download and purchase page on MyFonts.com. Here you will be able to obtain the proper license. The designer and publisher deserves to be paid for their work, as they have put in the hours and the creativity to produce such an amazing font. Good luck with your purchase and future use of this font. :)