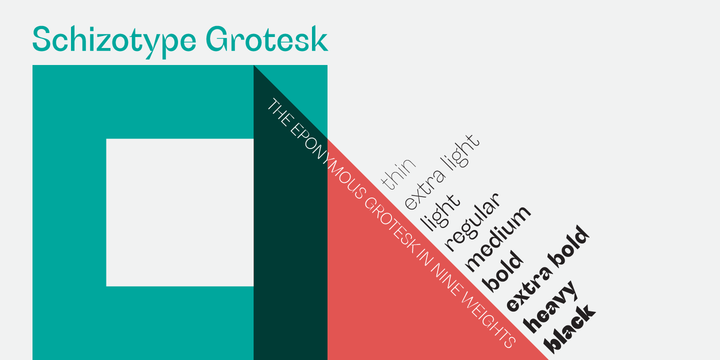 What is the Schizotype Grotesk™ font?

A neo-grotesk with a bit more bite, this is Schizotype Grotesk. It’s not your usual grot; this is purely display typography. Notches cut deep into the letterforms and the thick/thin contrast isn’t always where you might expect. It’s intended to be a challenging typeface – not beautiful or particularly ‘useful’ in any conventional sense, but it is at the very least interesting. In a world where everyone and their dog has their own grotesk offering, perhaps being interesting and that little bit different is in itself enough to give the face its utility. Besides, beauty is in the eye of the beholder. What really matters is what you think!
Schizotype Grotesk isn’t bogged down with a million and one OpenType features you’ll never use, but it does include proportional and tabular lining figures; automatic fractions; numerators and denominators; superscript and subscript numerals; case sensitive forms; and five stylistic sets that change [a], [g], [y], [IJ], and [@] respectively.

Here is a preview of how Schizotype Grotesk™ will look. For more previews using your own text as an example, click here.

No,Schizotype Grotesk™ is not free to download. You will need to pay for it I'm afraid. Almost every font that we list on HighFonts.com is a paid-for, premium font. We do have a Free Fonts section where we list free fonts that you can download. There is no point trying to find a free download of Schizotype Grotesk™ so please don't waste your time looking.

It is highly unlikely that you'll be able to find Schizotype Grotesk™ for free. There's a lot of websites that will say "Free Download" but these are just attempts to get you to click on a link which will either take you to an ad landing page or you risk getting viruses on your computer. In the rare occasion that you do find a free download for Schizotype Grotesk™ remember that it's illegal to use a font if you didn't pay for it!

If you really want Schizotype Grotesk™ and you want to truly own it the legal and safe way, then click here to visit the download and purchase page on MyFonts.com. Here you will be able to obtain the proper license. The designer and publisher deserves to be paid for their work, as they have put in the hours and the creativity to produce such an amazing font. Good luck with your purchase and future use of this font. :)