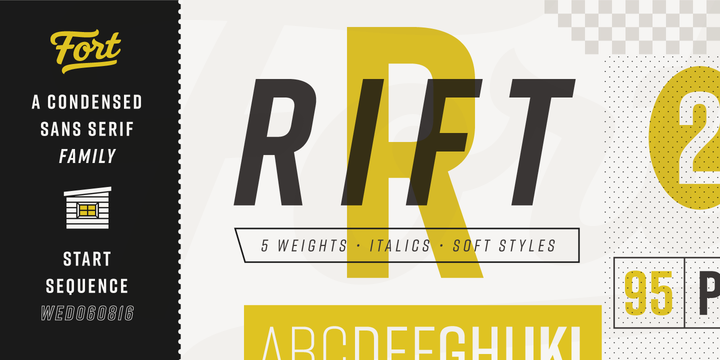 What is the Rift font?

The idea for Rift was conceived while designing a board game called Control. The time-travel theme and sci-fi overtones of the game pushed me to find inspiration in the titles and lettering on campy sci-fi posters from an earlier age. What was found was tall, geometric type often rooted in the square-sans genre. From that exploration, a bold typeface was built for the titles on the cards and logo of the game.
An interesting phenomenon occurred as Rift was placed in other scenarios—it adapted. Though sci-fi usage was the original influence, the end-product became something much-more versatile. This led me to develop new weights, italics, and soft styles for the face in order to accommodate a wider array of use. More…
Rift was further given Opentype features to allow designers more flexibility and control over the family. Stylistic Alternates give Rift a more playful vibe that still retains its earnestness. Tabular Figures are perfect for reports, timers, or apps when numbers and currency need to align vertically. Clocking in at 457 glyphs, Rift covers an extensive range of languages.

Here is a preview of how Rift will look. For more previews using your own text as an example, click here.


Is Rift A free font? Is Rift Free to Download?

No,Rift is not free to download. You will need to pay for it I'm afraid. Almost every font that we list on HighFonts.com is a paid-for, premium font. We do have a Free Fonts section where we list free fonts that you can download. There is no point trying to find a free download of Rift so please don't waste your time looking.

It is highly unlikely that you'll be able to find Rift for free. There's a lot of websites that will say "Free Download" but these are just attempts to get you to click on a link which will either take you to an ad landing page or you risk getting viruses on your computer. In the rare occasion that you do find a free download for Rift remember that it's illegal to use a font if you didn't pay for it!

If you really want Rift and you want to truly own it the legal and safe way, then click here to visit the download and purchase page on MyFonts.com. Here you will be able to obtain the proper license. The designer and publisher deserves to be paid for their work, as they have put in the hours and the creativity to produce such an amazing font. Good luck with your purchase and future use of this font. :)