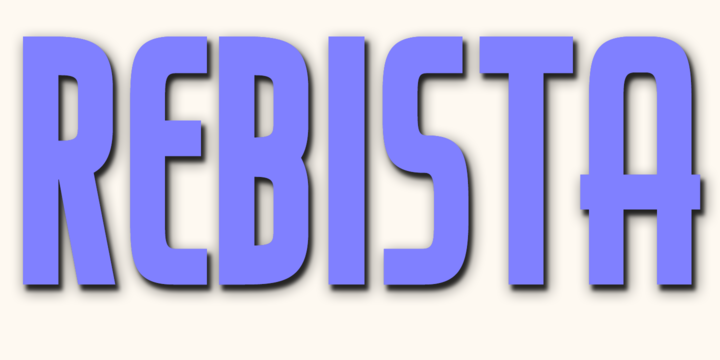 What is the Rebista™ font?

Rebista is an All-Caps sans-serif font with 7 weights, with an emphasis on vertical and horizontal lines and de-emphasis on curves. It has a slightly condensed and upright aspect. Depending on the context it can appear to have an old-style feel to it, or a modern feel. Its clean lines make it a legible and readable font for displays and headlines, as can be seen in the graphics in the gallery. More…
There’s all the Open Type features you’d expect, such as all the ff ligatures and other ligatures, letter variations and wi-fi symbols in Stylistic Alternates, Superscript and Subscript; zero for a slashed zero; and Kerning, which will be Class Kerning to include accented characters. Accented characters are provided for all the major European languages that use Latin letters, of course. Full details are included in the Instructions file which should be automatically downloaded with the zip.

Here is a preview of how Rebista™ will look. For more previews using your own text as an example, click here.

No,Rebista™ is not free to download. You will need to pay for it I'm afraid. Almost every font that we list on HighFonts.com is a paid-for, premium font. We do have a Free Fonts section where we list free fonts that you can download. There is no point trying to find a free download of Rebista™ so please don't waste your time looking.

It is highly unlikely that you'll be able to find Rebista™ for free. There's a lot of websites that will say "Free Download" but these are just attempts to get you to click on a link which will either take you to an ad landing page or you risk getting viruses on your computer. In the rare occasion that you do find a free download for Rebista™ remember that it's illegal to use a font if you didn't pay for it!

If you really want Rebista™ and you want to truly own it the legal and safe way, then click here to visit the download and purchase page on MyFonts.com. Here you will be able to obtain the proper license. The designer and publisher deserves to be paid for their work, as they have put in the hours and the creativity to produce such an amazing font. Good luck with your purchase and future use of this font. :)