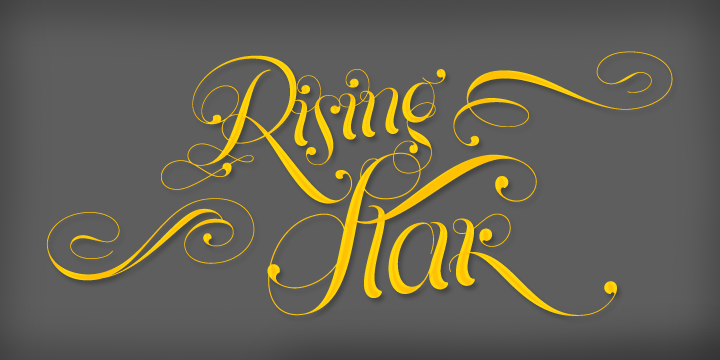 What is the Parfait Script font?

Parfait Script Pro takes its inspiration from Spencerian script and pointed brush lettering, two styles of writing (or of drawing letters, a calligrapher would say), that the designer successfully combined.
Parfait Script Pro is an Open-Type font designed by Maximiliano R. Sproviero between 2009 and 2010. It has over 850 glyphs,
The Beginnings More…
Exactly a year ago, Lián started what would be Parfait Script today.
With the idea of creating a totally unique font, Lián started drawing the first letters by altering the typical ductus of the calligraphic styles he was practicing those days: that is, he wrote from the bottom to the top, which is something that calligraphy books do not support.
Being a bit of a rebel, he made almost every letter of the alphabet like this. This gave Parfait such an unusual look.
Lián wanted a name which reflected this rebellion, so at first he named the font Nonpareil Script, which, as you may know, is a French word that means “incomparable.
The closer 2009 came to its end, the more Parfait Script grew. The font was shouting for alternates, and that was when the most entertaining part began (and also when the name changed). Lián studied the decorative swirls of the Spencerian script style and tried to include those lovely loops into his type. He also entered the world of pointed brush lettering to give Parfait a gestural look. This was when lots of the alternates came to life. Now his purpose was not only to change the common ductus; but also to exaggerate the contrasts of the strokes, with very thick and thin strokes all together.
In 2010 he added more alternates and ligatures. The font was intended for universal use, since it contains glyphs and ligatures for the most common combinations of letters and words.
Once more, a combination of styles gave wonderful results.
Parfait Script Pro and its voluptuous style hopes to be useful for whatever you design.
Technical
Parfait Script has more than 850 glyphs. It’s up to you to choose, it’s up to you to have fun. Parfait would love to play.
The font has lots of alternates. They’ll certainly either embellish your words or provide more legibility. The alternates are: Standard Ligatures; Contextual Alternates; Discretionary Ligatures; Swashes; Stylistic Alternates; Titling Alternates; Terminal Forms; Historical Alternates * ; Stylistic Ligatures; Stylistic Set 1 and 2 * ; Ornaments. (* These Alternates are only included in Parfait Script Pro).
Parfait Script Pro contains everything.
Advice: Use designing programs that support the OpenType features named above, so you can easily alternate glyphs.
However, for those who don’t have this kind of program, or for those who don’t want the entire font, we offer Parfait Script Pro as several separate fonts: Parfait Script Standard (the best for text); Parfait Script Contextual (decorative); Parfait Script Stylistic (decorative); Parfait Script Swashes (for giving the last letter a nice touch); Parfait Script Titling (both decorative and more Roman); Parfait Script Endings (for giving the word the look of a signature); and Parfait Script Ornaments (a set of swirls).
These versions of Parfait Script Pro are Open-Type programmed too, in order to include the Standard, Discretional and Stylistic Ligatures.
Pssst!… Take a look at Parfait Script Pro’s Guide in the gallery section in order to discover this beauty!

Here is a preview of how Parfait Script will look. For more previews using your own text as an example, click here.

No,Parfait Script is not free to download. You will need to pay for it I'm afraid. Almost every font that we list on HighFonts.com is a paid-for, premium font. We do have a Free Fonts section where we list free fonts that you can download. There is no point trying to find a free download of Parfait Script so please don't waste your time looking.

It is highly unlikely that you'll be able to find Parfait Script for free. There's a lot of websites that will say "Free Download" but these are just attempts to get you to click on a link which will either take you to an ad landing page or you risk getting viruses on your computer. In the rare occasion that you do find a free download for Parfait Script remember that it's illegal to use a font if you didn't pay for it!

If you really want Parfait Script and you want to truly own it the legal and safe way, then click here to visit the download and purchase page on MyFonts.com. Here you will be able to obtain the proper license. The designer and publisher deserves to be paid for their work, as they have put in the hours and the creativity to produce such an amazing font. Good luck with your purchase and future use of this font. :)