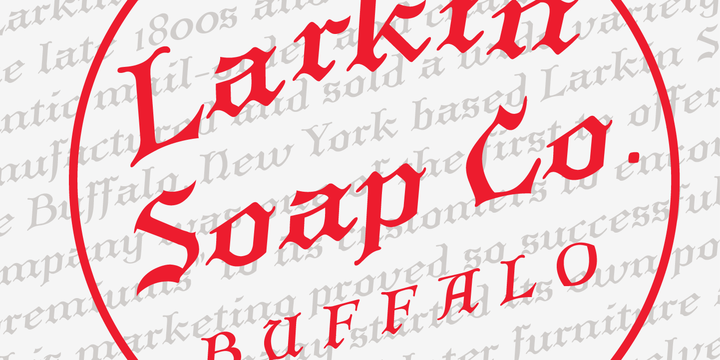 This font is based on a lettering style used as a logotype for the Larkin Company circa 1900.
The Larkin Company began as a soap company in the late 1800s and eventually grew into a gigantic mail-order and chain store which manufactured and sold a wide variety of products. The Buffalo, New York based Larkin Soap Company was one of the first to offer promotional “premiums” to its customers to encourage sales. This marketing proved so successful that The Larkin Company started its own pottery to produce China and later furniture and other items which became products themselves. More…
One of the Larkin Company’s star salesmen and exectutives retired early in 1893 to start his own venture. Elbert Hubbard combined his tremendous salesmanship with his love of the Arts and Crafts movement to found the famous Roycroft movement based in East Aurora New York.
The other executives in the Larkin Company enlisted Frank Lloyd Wright to design the Larkin Administration building as well as several residences for various members of the families of the Larkin executives, most notably Darwin D. Martin.
The Larkin Administration Building was demolished by short-sighted developers in the 1950s, but most of the Wright designed residences still exist. The remaining Larkin warehouse buildings are currently undergoing major renovations. This font was commissioned to serve as signage and titling for materials related to the LCo. Building which houses premium office space as well as a caf., day care and museum in the original Larkin company spirit.
This lettering style is unusual in that combines aspects of several lettering styles. It is essentially a Germanic Blackletter but with many romanized capital letters and also features an italic slant along with some italic lower case traits. It is evocative of “old world” craftsmanship and early 20th century romanticism . The full font was developed was developed based on the limited “logos” which were all essential hand rendered variations of each other. The source Letters came from signage with the words: “The Larkin Co.”, “The Larkin Store” & “Larkin Soap Co.”

Here is a preview of how P22 Larkin™ will look. For more previews using your own text as an example, click here.

No,P22 Larkin™ is not free to download. You will need to pay for it I'm afraid. Almost every font that we list on HighFonts.com is a paid-for, premium font. We do have a Free Fonts section where we list free fonts that you can download. There is no point trying to find a free download of P22 Larkin™ so please don't waste your time looking.

It is highly unlikely that you'll be able to find P22 Larkin™ for free. There's a lot of websites that will say "Free Download" but these are just attempts to get you to click on a link which will either take you to an ad landing page or you risk getting viruses on your computer. In the rare occasion that you do find a free download for P22 Larkin™ remember that it's illegal to use a font if you didn't pay for it!

If you really want P22 Larkin™ and you want to truly own it the legal and safe way, then click here to visit the download and purchase page on MyFonts.com. Here you will be able to obtain the proper license. The designer and publisher deserves to be paid for their work, as they have put in the hours and the creativity to produce such an amazing font. Good luck with your purchase and future use of this font. :)