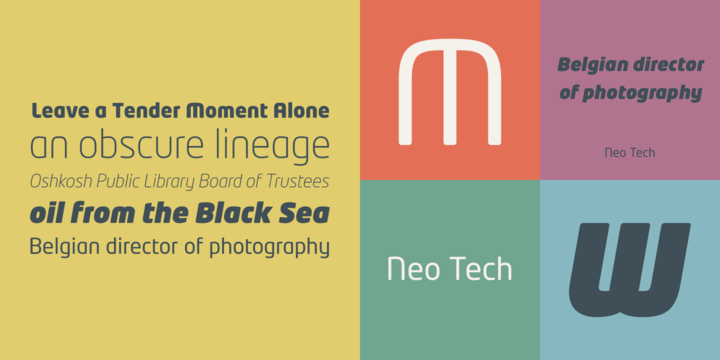 What is the Neo® Tech font?

Neo Sans began as an intriguing assignment from a branding agency. The agency’s client wanted an “ultra modern” type family that was “futuristic without being gimmicky or ephemeral.” When a bureaucratic decision cancelled the project, Monotype staff designer Sebastian Lester decided to finish the design on his own. “I was left with a sketchbook full of ideas,” he said, “and thought it would be a shame not to see what came of them.”
Lester decided that the principal ingredient of an “ultra modern” typeface was simplicity of character structure: a carefully drawn, monoline form, open letter shapes and smooth, strong curves. By further amplifying these qualities, he crossed the line from modern to futuristic. More…
Two highly functional and versatile typefaces emerged. These are Neo Sans and Neo Tech, designs Lester describes as “legible without being neutral, nuanced without being fussy, and expressive without being distracting.” Both the Neo Sans and the more minimalist Neo Tech families are available in six weights, ranging from Light to Ultra, with companion italics. Neo Tech offers a suite of alternate characters.

Here is a preview of how Neo® Tech will look. For more previews using your own text as an example, click here.

No,Neo® Tech is not free to download. You will need to pay for it I'm afraid. Almost every font that we list on HighFonts.com is a paid-for, premium font. We do have a Free Fonts section where we list free fonts that you can download. There is no point trying to find a free download of Neo® Tech so please don't waste your time looking.

It is highly unlikely that you'll be able to find Neo® Tech for free. There's a lot of websites that will say "Free Download" but these are just attempts to get you to click on a link which will either take you to an ad landing page or you risk getting viruses on your computer. In the rare occasion that you do find a free download for Neo® Tech remember that it's illegal to use a font if you didn't pay for it!

If you really want Neo® Tech and you want to truly own it the legal and safe way, then click here to visit the download and purchase page on MyFonts.com. Here you will be able to obtain the proper license. The designer and publisher deserves to be paid for their work, as they have put in the hours and the creativity to produce such an amazing font. Good luck with your purchase and future use of this font. :)