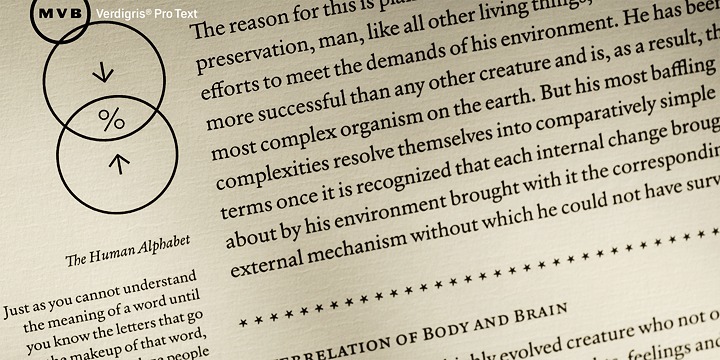 What is the MVB Verdigris Pro® font?

Garalde: the word itself sounds antique and arcane to anyone who isn’t fresh out of design school, but the sort of typeface it describes is actually quite familiar to all of us. Despite its age—born fairly early in printing’s history—the style has fared well; Garaldes are still the typefaces of choice for books and other long reading. And so we continue to see text set in old favorites—Garamond, Sabon®, and their Venetian predecessor, Bembo®. Yet many new books don’t feel as handsome and readable as older books printed in the original, metal type. The problem is that digital type revivals are typically facsimiles of their metal predecessors, merely duplicating the letterforms rather than capturing the impression—both physical and emotional—that the typefaces once left on the page. More…
MVB Verdigris is a Garalde text face for the digital age. Inspired by the work of 16th-century punchcutters Robert Granjon (roman) and Pierre Haultin (italic), Verdigris celebrates tradition but is not beholden to it. Created specifically to deliver good typographic color as text, Mark van Bronkhorst’s design meets the needs of today’s designer using today’s paper and press. And now, as a full-featured OpenType release, it’s optimized for the latest typesetting technologies too.
With MVB Verdigris Pro Text, Van Bronkhorst has revisited the family, adding small caps to all weights and styles, extensive language support, and other typographic refinements. Among the features:
• Support for most Latin-based languages, including those of Central and Eastern Europe.
• Precision spacing and kerning by type editor Linnea Lundquist. The fonts practically set beautiful text by themselves.
• Proportional and tabular figure sets, each with oldstyle and lining forms with currency symbols to match.
• Ligatures to maintain even spacing while accommodating Verdigris’ elegant, sweeping glyphs.
• Numerators and denominators for automatic fractions of any denomination.
• Useful, straightforward dingbats including arrows, checkboxes, and square and round bullets in three sizes.
• Alternative ‘zero’ and ‘one’ oldstyle figures for those who prefer more contemporary versions over the traditional forms.
• An alternative uppercase Q with a more reserved tail.
• An optional, roman “Caps” font providing mid-caps, useful for titling settings, and for those situations when caps seem too big and small caps seem too small.
__________
Sabon is a trademark of Linotype Corp. Bembo is a trademark of the Monotype Corporation.

Here is a preview of how MVB Verdigris Pro® will look. For more previews using your own text as an example, click here.

No,MVB Verdigris Pro® is not free to download. You will need to pay for it I'm afraid. Almost every font that we list on HighFonts.com is a paid-for, premium font. We do have a Free Fonts section where we list free fonts that you can download. There is no point trying to find a free download of MVB Verdigris Pro® so please don't waste your time looking.

It is highly unlikely that you'll be able to find MVB Verdigris Pro® for free. There's a lot of websites that will say "Free Download" but these are just attempts to get you to click on a link which will either take you to an ad landing page or you risk getting viruses on your computer. In the rare occasion that you do find a free download for MVB Verdigris Pro® remember that it's illegal to use a font if you didn't pay for it!

If you really want MVB Verdigris Pro® and you want to truly own it the legal and safe way, then click here to visit the download and purchase page on MyFonts.com. Here you will be able to obtain the proper license. The designer and publisher deserves to be paid for their work, as they have put in the hours and the creativity to produce such an amazing font. Good luck with your purchase and future use of this font. :)