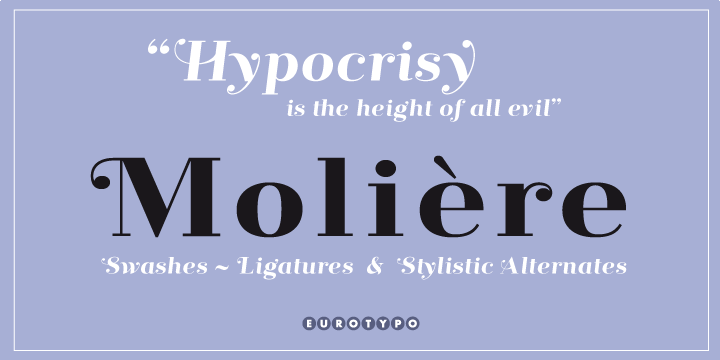 What is the Moliere font?

The life of Molière is a story of struggle, hard work, domestic unhappiness, death and burial in obscurity and almost in shame.
Molière left behind a body of work that not only changed the face of French classical comedy, but has also come to influence the work of other dramatists from around the world. More…
Despite his own preference for tragedy, which he had tried to further with the Illustre Théâtre, Molière became famous for his farces, which were generally in one act and performed after the tragedy.
Both the comic and the serious drama were powerfully affected by the work of Molière, not only in his own age and country but everywhere and up to the present time.
Didot is a name given to a group of typefaces named after the famous French printing and type producing family. The classification is known as modern, or Didone. The typeface we know today was based on a collection of related types developed in the period 1784–1811. Firmin Didot cut the letters, and cast them as type in Paris.
Along with Giambattista Bodoni of Italy, Firmin Didot is credited with establishing the use of the “Modern” classification of typefaces. The types that Didot used are characterized by extreme contrast in thick strokes and thin strokes, by the use of hairline serifs and by the vertical stress of the letters.
As in the extreme contrasts of the literature of Molière, in Didione’s typefaces, thick and thin strokes, straight and curved, are the most relevant characteristic for an era marked by the changes.

Here is a preview of how Moliere will look. For more previews using your own text as an example, click here.


Is Moliere A free font? Is Moliere Free to Download?

No,Moliere is not free to download. You will need to pay for it I'm afraid. Almost every font that we list on HighFonts.com is a paid-for, premium font. We do have a Free Fonts section where we list free fonts that you can download. There is no point trying to find a free download of Moliere so please don't waste your time looking.

It is highly unlikely that you'll be able to find Moliere for free. There's a lot of websites that will say "Free Download" but these are just attempts to get you to click on a link which will either take you to an ad landing page or you risk getting viruses on your computer. In the rare occasion that you do find a free download for Moliere remember that it's illegal to use a font if you didn't pay for it!

If you really want Moliere and you want to truly own it the legal and safe way, then click here to visit the download and purchase page on MyFonts.com. Here you will be able to obtain the proper license. The designer and publisher deserves to be paid for their work, as they have put in the hours and the creativity to produce such an amazing font. Good luck with your purchase and future use of this font. :)