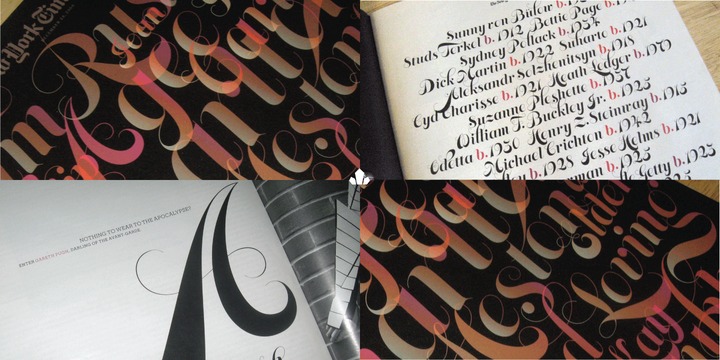 What is the Memoriam™ font?

The tradition at the New York Times magazine has been to dedicate the year’s last issue to the people who passed away during the year, especially those whose lives have affected us. Art director Nancy Harris Rouemy, whose typographic design sense has earned her many prestigious awards over the years, decided on an all-type magazine cover for the 2008 issue, and commissioned Canada Type to do a new typeface especially for that project. Now Memoriam is finally here in retail form—not least because hundreds of people have asked for it. More…
Though a few other Canada Type faces were used in the magazine with great results over the preceding months (mainly Ambassador Script and Sympathique), Nancy thought a some of the ideas in Jezebel’s uppercase and Treasury’s lowercase would be a good fit onto an all-type commemorative cover, but with a much higher contrast and the infusion of a more luxurious and elegant brand of poster calligraphy that doesn’t date itself. After a few different attempts, the first shapes were born, and six weeks later there were enough forms to do the cover. The typeface was such a success with the editors and designers, it was used all over the magazine, instead of just the cover.
The list of people being commemorated with this font was certainly enough to convince us to take on such a demanding project. Patrick Griffin grew up with a culture where names like George Carlin, Michael Crichton, Bobby Fisher, Charlton Heston, and Paul Newman, were daily household language, and this was a great opportunity to offer a final tribute to them. Also the pleasure of working with Nancy Harris Rouemy, the lady with the X-ray eyes, with her unwavering vision and constant attention to typographic detail, went a long way to shaping this typeface and making it the modern and contemporary piece of elegance it became.
The Memoriam typeface contains a lot of alternates for most characters, so it was divided into three separate fonts for the Postscript and True Type formats. The OpenType version, Memoriam Pro, combines all three fonts in one OT-programmed file, and even contains a few more extras that are not in the legacy format sets—so if you use InDesign CS+, Illustrator CS+ or QuarkXpress 7+, Memoriam Pro is the one you want.
This family covers an extensive range of Latin-based languages, including Western and Eastern European, Baltic, Turkish, Maltese, Celtic/Welsh, to make for over 365 characters in each of the Memoriam fonts.
Due to the extreme thinness of the hairlines, it is recommended to use Memoriam at large display sizes only.

Here is a preview of how Memoriam™ will look. For more previews using your own text as an example, click here.

No,Memoriam™ is not free to download. You will need to pay for it I'm afraid. Almost every font that we list on HighFonts.com is a paid-for, premium font. We do have a Free Fonts section where we list free fonts that you can download. There is no point trying to find a free download of Memoriam™ so please don't waste your time looking.

It is highly unlikely that you'll be able to find Memoriam™ for free. There's a lot of websites that will say "Free Download" but these are just attempts to get you to click on a link which will either take you to an ad landing page or you risk getting viruses on your computer. In the rare occasion that you do find a free download for Memoriam™ remember that it's illegal to use a font if you didn't pay for it!

If you really want Memoriam™ and you want to truly own it the legal and safe way, then click here to visit the download and purchase page on MyFonts.com. Here you will be able to obtain the proper license. The designer and publisher deserves to be paid for their work, as they have put in the hours and the creativity to produce such an amazing font. Good luck with your purchase and future use of this font. :)