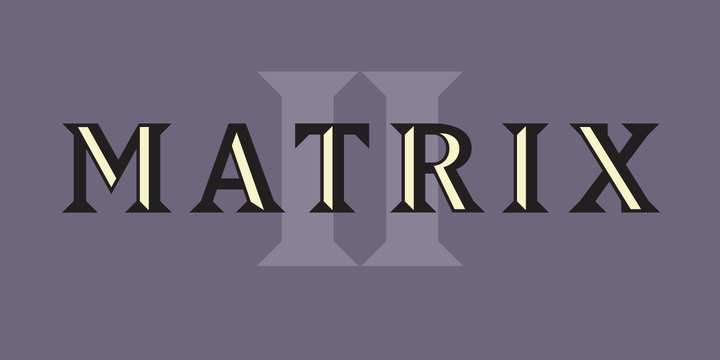 What is the Matrix II font?

Matrix II is a complete reworking of the original Matrix type family which was designed by Zuzana Licko in 1986. More…
The redesign, which started in January 2007, was initiated by the need to create an OpenType version of Matrix. With the hood open, so to speak, Licko used the opportunity to make subtle changes and to fine tune many of the existing characters which were designed some 20 years ago. The contrast between thick and thin strokes was decreased in some instances, and overshoots were corrected. The width of various characters was adjusted and regularized. The cross stroke on the f was simplified on most weights. The design of the lower case g was revisited and an alternate single story version was designed and added to the OpenType version. Seven new fonts were also added to the family: a Semi Narrow, Semi Wide, Semi Tall, Inline Italic, and 3 weights of Italic – a less flamboyant version of Matrix Script. To clearly set this version apart from the original Matrix, and to avoid conflict with previous versions, its name was changed to Matrix II.

Here is a preview of how Matrix II will look. For more previews using your own text as an example, click here.

No,Matrix II is not free to download. You will need to pay for it I'm afraid. Almost every font that we list on HighFonts.com is a paid-for, premium font. We do have a Free Fonts section where we list free fonts that you can download. There is no point trying to find a free download of Matrix II so please don't waste your time looking.

It is highly unlikely that you'll be able to find Matrix II for free. There's a lot of websites that will say "Free Download" but these are just attempts to get you to click on a link which will either take you to an ad landing page or you risk getting viruses on your computer. In the rare occasion that you do find a free download for Matrix II remember that it's illegal to use a font if you didn't pay for it!

If you really want Matrix II and you want to truly own it the legal and safe way, then click here to visit the download and purchase page on MyFonts.com. Here you will be able to obtain the proper license. The designer and publisher deserves to be paid for their work, as they have put in the hours and the creativity to produce such an amazing font. Good luck with your purchase and future use of this font. :)