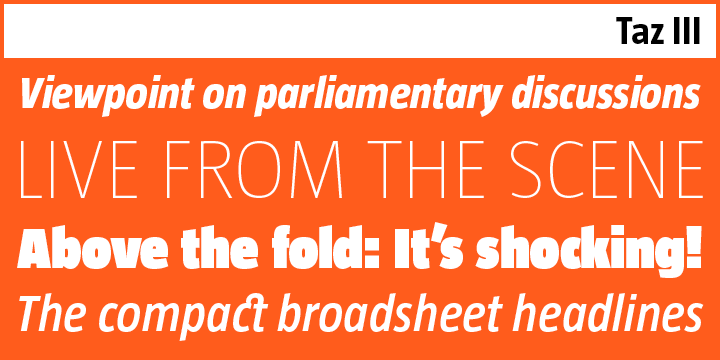 What is the LF Taz III font?

The Taz type family was originally developed as a headline typeface for taz – short for Tageszeitung – a nation-wide German daily. It was, and still is, the cornerstone of the paper’s strong, trustworthy visual identity. Says Luc(as): “For a headline font, you want the lines to be as closely line-spaced as possible. The accents on the capitals – a very common feature in German – cannot take up too much space.” Ascenders and descenders were kept short for maximum impact.
Although the Taz family was designed as a newspaper font, it works equally well in many other contexts. It has been used in glossy magazines, sales catalogues and corporate brochures, and is appreciated for its readability when used for longer texts in medium sizes. More…
Since its inception, the Taz typeface has steadily been expanded. The current version, Taz III, comes in a staggering range of 15 weights, including a large series of distinctive hairline fonts and an UltraBlack for maximum impact on giant posters and in magazine headlines.
The current OpenType version includes character sets for dozens of languages including special sets for Central European, Baltic, Icelandic and Turkish.

Here is a preview of how LF Taz III will look. For more previews using your own text as an example, click here.

No,LF Taz III is not free to download. You will need to pay for it I'm afraid. Almost every font that we list on HighFonts.com is a paid-for, premium font. We do have a Free Fonts section where we list free fonts that you can download. There is no point trying to find a free download of LF Taz III so please don't waste your time looking.

It is highly unlikely that you'll be able to find LF Taz III for free. There's a lot of websites that will say "Free Download" but these are just attempts to get you to click on a link which will either take you to an ad landing page or you risk getting viruses on your computer. In the rare occasion that you do find a free download for LF Taz III remember that it's illegal to use a font if you didn't pay for it!

If you really want LF Taz III and you want to truly own it the legal and safe way, then click here to visit the download and purchase page on MyFonts.com. Here you will be able to obtain the proper license. The designer and publisher deserves to be paid for their work, as they have put in the hours and the creativity to produce such an amazing font. Good luck with your purchase and future use of this font. :)