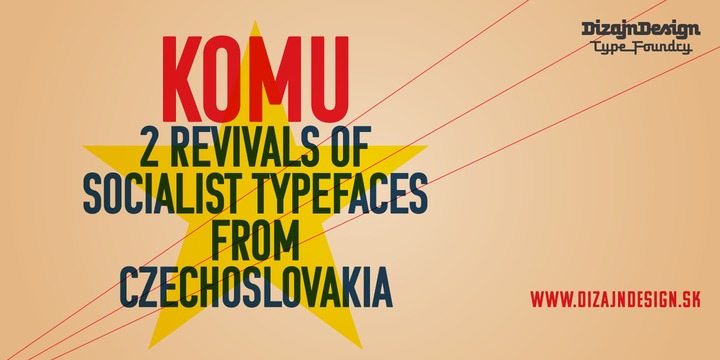 What is the Komu font?

Komu is the revival of a style of letters frequently used on billboards during the socialist period in the former Czechoslovakia. These were usually uppercase letters made of paper and covered with a layer of aluminum foil. People just had to pick the letters (that included a variety of widths and sizes) out from a box and pin them up on a styrofoam billboard, thus making it easy to announce any event.
Komu consists of two styles. Version A is rather squarish and includes some weird characters (K, 5, narrow E, strange diacritics) while version B is more rounded with most letters equally wide (with the exception of E, F and L, which look really wide next to the rest). The optical disparity of the original letters was kept, so that some of them look slightly darker than the others. More…
Komu is intended to be used on posters, books and other products about Socialism in our region and includes full support for languages based on latin script.

Here is a preview of how Komu will look. For more previews using your own text as an example, click here.


Is Komu A free font? Is Komu Free to Download?

No,Komu is not free to download. You will need to pay for it I'm afraid. Almost every font that we list on HighFonts.com is a paid-for, premium font. We do have a Free Fonts section where we list free fonts that you can download. There is no point trying to find a free download of Komu so please don't waste your time looking.

It is highly unlikely that you'll be able to find Komu for free. There's a lot of websites that will say "Free Download" but these are just attempts to get you to click on a link which will either take you to an ad landing page or you risk getting viruses on your computer. In the rare occasion that you do find a free download for Komu remember that it's illegal to use a font if you didn't pay for it!

If you really want Komu and you want to truly own it the legal and safe way, then click here to visit the download and purchase page on MyFonts.com. Here you will be able to obtain the proper license. The designer and publisher deserves to be paid for their work, as they have put in the hours and the creativity to produce such an amazing font. Good luck with your purchase and future use of this font. :)