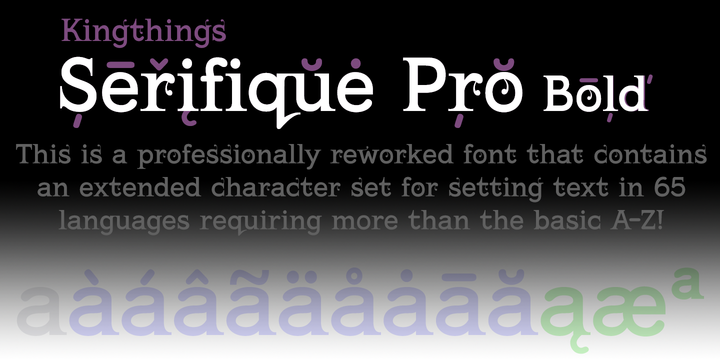 This is what you get when you mix monoline rounded letters with some bracketed serifs and finish it off with a sprinkle of ornamental appendages. The result is very readable, rather original and quite charming.
I have fixed some inconsistencies in serif designs across the weights, cleaned up the serif connections – and added a fourth weight. But I have kept all the wonky curves and slightly differing stroke thicknesses, as they are so integral to the charm. More…
Kevin King says: “I guess all type designers at some point think ‘Well, I’ll just have a go at a standard text face…’ There is a long story here somewhere, suffice it to say that I started with the thinnest version – typical. I wanted to make a standard serif text face – until I saw it in print and thought “Yuk! it looks like everything else!” – still does really but with twiddles and pooneys…”
If you find the “twiddles & pooneys” too much you can tone them down with the OpenType Stylistic Alternate feature (which will make sure they don’t appear on three consecutive letters) or remove them completely with the OpenType Swash feature.
ALL fonts from CheapProFonts have very extensive language support:
They contain some unusual diacritic letters (some of which are contained in the Latin Extended-B Unicode block) supporting: Cornish, Filipino (Tagalog), Guarani, Luxembourgian, Malagasy, Romanian, Ulithian and Welsh.
They also contain all glyphs in the Latin Extended-A Unicode block (which among others cover the Central European and Baltic areas) supporting: Afrikaans, Belarusian (Lacinka), Bosnian, Catalan, Chichewa, Croatian, Czech, Dutch, Esperanto, Greenlandic, Hungarian, Kashubian, Kurdish (Kurmanji), Latvian, Lithuanian, Maltese, Maori, Polish, Saami (Inari), Saami (North), Serbian (latin), Slovak(ian), Slovene, Sorbian (Lower), Sorbian (Upper), Turkish and Turkmen.
And they of course contain all the usual “western” glyphs supporting: Albanian, Basque, Breton, Chamorro, Danish, Estonian, Faroese, Finnish, French, Frisian, Galican, German, Icelandic, Indonesian, Irish (Gaelic), Italian, Northern Sotho, Norwegian, Occitan, Portuguese, Rhaeto-Romance, Sami (Lule), Sami (South), Scots (Gaelic), Spanish, Swedish, Tswana, Walloon and Yapese.

Here is a preview of how Kingthings Serifique Pro will look. For more previews using your own text as an example, click here.

It is highly unlikely that you'll be able to find Kingthings Serifique Pro for free. There's a lot of websites that will say "Free Download" but these are just attempts to get you to click on a link which will either take you to an ad landing page or you risk getting viruses on your computer. In the rare occasion that you do find a free download for Kingthings Serifique Pro remember that it's illegal to use a font if you didn't pay for it!

If you really want Kingthings Serifique Pro and you want to truly own it the legal and safe way, then click here to visit the download and purchase page on MyFonts.com. Here you will be able to obtain the proper license. The designer and publisher deserves to be paid for their work, as they have put in the hours and the creativity to produce such an amazing font. Good luck with your purchase and future use of this font. :)