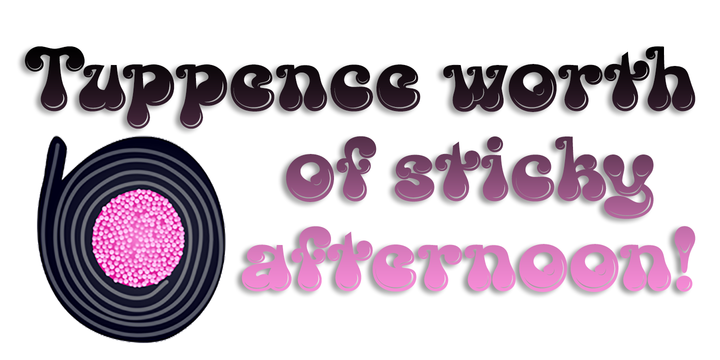 Kevin King says: “When I started this font it was called Pestle… It didn’t run – it didn’t even walk. At some point I thought, Hmm! Looks a bit like Liquorice! And now… Voila! I remember being able to buy about a yard of Liquorice rolled round a central comfit – how fab! Tuppence worth of sticky afternoon! You could also buy bundles of Liquorice root – which looked like black twigs with bright yellow wood – they left my teeth full of black twiggy bits… The past is a strange Lady – Bless her! This was almost Kingthings Leechy… just another one of my bulbous shiny things – I have always liked letter-shapes with ‘bottom’, probably a 70’s thing, as many a seventies thing did indeed possess it – including the fabulous Chaka Kahn… Oooh, Diva!” More…
ALL fonts from CheapProFonts have very extensive language support:
They contain some unusual diacritic letters (some of which are contained in the Latin Extended-B Unicode block) supporting: Cornish, Filipino (Tagalog), Guarani, Luxembourgian, Malagasy, Romanian, Ulithian and Welsh.
They also contain all glyphs in the Latin Extended-A Unicode block (which among others cover the Central European and Baltic areas) supporting: Afrikaans, Belarusian (Lacinka), Bosnian, Catalan, Chichewa, Croatian, Czech, Dutch, Esperanto, Greenlandic, Hungarian, Kashubian, Kurdish (Kurmanji), Latvian, Lithuanian, Maltese, Maori, Polish, Saami (Inari), Saami (North), Serbian (latin), Slovak(ian), Slovene, Sorbian (Lower), Sorbian (Upper), Turkish and Turkmen.
And they of course contain all the usual “western” glyphs supporting: Albanian, Basque, Breton, Chamorro, Danish, Estonian, Faroese, Finnish, French, Frisian, Galican, German, Icelandic, Indonesian, Irish (Gaelic), Italian, Northern Sotho, Norwegian, Occitan, Portuguese, Rhaeto-Romance, Sami (Lule), Sami (South), Scots (Gaelic), Spanish, Swedish, Tswana, Walloon and Yapese.

Here is a preview of how Kingthings Lickorishe Pro will look. For more previews using your own text as an example, click here.

No,Kingthings Lickorishe Pro is not free to download. You will need to pay for it I'm afraid. Almost every font that we list on HighFonts.com is a paid-for, premium font. We do have a Free Fonts section where we list free fonts that you can download. There is no point trying to find a free download of Kingthings Lickorishe Pro so please don't waste your time looking.

It is highly unlikely that you'll be able to find Kingthings Lickorishe Pro for free. There's a lot of websites that will say "Free Download" but these are just attempts to get you to click on a link which will either take you to an ad landing page or you risk getting viruses on your computer. In the rare occasion that you do find a free download for Kingthings Lickorishe Pro remember that it's illegal to use a font if you didn't pay for it!

If you really want Kingthings Lickorishe Pro and you want to truly own it the legal and safe way, then click here to visit the download and purchase page on MyFonts.com. Here you will be able to obtain the proper license. The designer and publisher deserves to be paid for their work, as they have put in the hours and the creativity to produce such an amazing font. Good luck with your purchase and future use of this font. :)