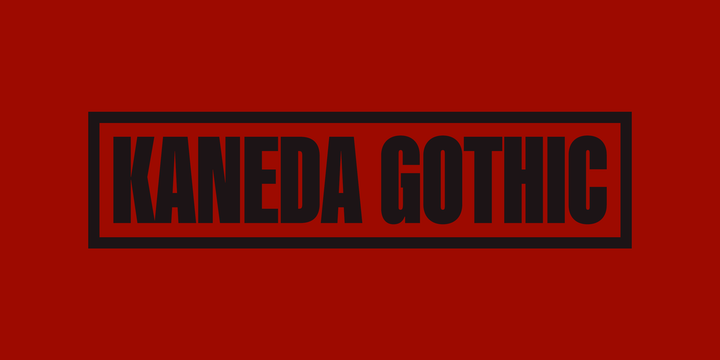 What is the Kaneda Gothic™ font?

Kaneda Gothic is a whole new basic gothic.
Philosophically, Kaneda Gothic is the one of the niche answers in the interspace between these antinomies.
Image of near-future and giant metropolis in 80s, 90s vs our real life in the 2010s,20s.
What we acquired by Industrial, scientific developments vs our emotional demands, imagination in our brain.
Design transition in short period of time vs the consistency of real function which laid along the human history.
Technically, Kaneda Gothic has a geometric letterform which called “gaspipe” or “Gothic” in woodtype era.
But Kaneda has very sharp curves and lines for contemporary demands, that is to say, impact and clearness.
Geometric and clear letterform is perfect for eye-catching part such like company logo, movie title and picture’s captions.
Consists of seven weights and their matching italics. Supporting almost all latin languages.

Here is a preview of how Kaneda Gothic™ will look. For more previews using your own text as an example, click here.

No,Kaneda Gothic™ is not free to download. You will need to pay for it I'm afraid. Almost every font that we list on HighFonts.com is a paid-for, premium font. We do have a Free Fonts section where we list free fonts that you can download. There is no point trying to find a free download of Kaneda Gothic™ so please don't waste your time looking.

It is highly unlikely that you'll be able to find Kaneda Gothic™ for free. There's a lot of websites that will say "Free Download" but these are just attempts to get you to click on a link which will either take you to an ad landing page or you risk getting viruses on your computer. In the rare occasion that you do find a free download for Kaneda Gothic™ remember that it's illegal to use a font if you didn't pay for it!

If you really want Kaneda Gothic™ and you want to truly own it the legal and safe way, then click here to visit the download and purchase page on MyFonts.com. Here you will be able to obtain the proper license. The designer and publisher deserves to be paid for their work, as they have put in the hours and the creativity to produce such an amazing font. Good luck with your purchase and future use of this font. :)