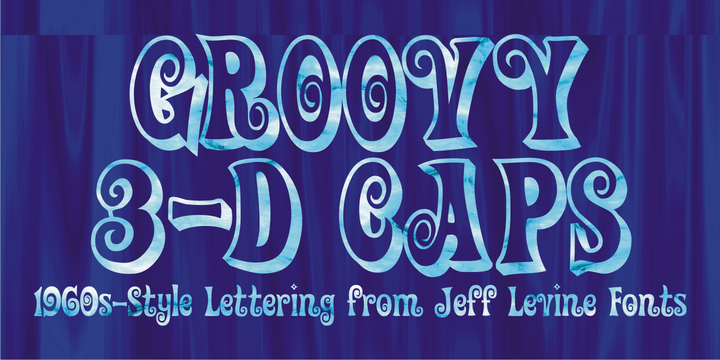 What is the Groovy 3D Caps JNL font?

It all started with a simple idea back in 1998: do a digital version of a “lost” 70’s typeface, and make up the missing letters that were not present in the only available example Jeff Levine had to work with.
Jeff wasn’t yet doing his own digital font creation, so he hooked up with Brad Nelson who owns a small foundry called Brain Eaters Fonts. Together, they collaborated on “Action Is”- a freeware font named after the source of the type example. This was a title page for a commemorative photo album of images from the 60’s TV music show “Where the Action Is”, formerly hosted by Jeff’s employer at the time, singer-writer-producer Steve Alaimo. More…
The free font took off like a rocket, being released just at the peak of the 60’s/70’s retro craze in the late 1990’s, and it was EVERYWHERE! It showed up on TV shows, packaging and web design — and was even spotted on signage used on the side of a major amusement resort’s retro-themed hotel. From that point on, Jeff kept getting requests for a version with a lower case.
Although they shared the copyright in the freeware version, Brad Nelson gave Jeff his blessing to re-work and take Action Is into the realm of commercial type.
Newly improved and re-released as Groovy Happening JNL, it became one of Jeff’s better selling type designs. A simplified, yet similar font was issued called Groovy Summer JNL.
Now, after about a decade, Jeff had decided to clean up the 3-D (drop shadow) version that was originally freeware with many minute design flaws and re-release it commercially.
Groovy 3D Caps JNL is an all-caps, limited character set font which ties in well with the previous releases, yet retains itís 1960s-1970s era charm.
The font flag art is courtesy of Barbara D. Berney and is used by permission.

Here is a preview of how Groovy 3D Caps JNL will look. For more previews using your own text as an example, click here.

No,Groovy 3D Caps JNL is not free to download. You will need to pay for it I'm afraid. Almost every font that we list on HighFonts.com is a paid-for, premium font. We do have a Free Fonts section where we list free fonts that you can download. There is no point trying to find a free download of Groovy 3D Caps JNL so please don't waste your time looking.

It is highly unlikely that you'll be able to find Groovy 3D Caps JNL for free. There's a lot of websites that will say "Free Download" but these are just attempts to get you to click on a link which will either take you to an ad landing page or you risk getting viruses on your computer. In the rare occasion that you do find a free download for Groovy 3D Caps JNL remember that it's illegal to use a font if you didn't pay for it!

If you really want Groovy 3D Caps JNL and you want to truly own it the legal and safe way, then click here to visit the download and purchase page on MyFonts.com. Here you will be able to obtain the proper license. The designer and publisher deserves to be paid for their work, as they have put in the hours and the creativity to produce such an amazing font. Good luck with your purchase and future use of this font. :)