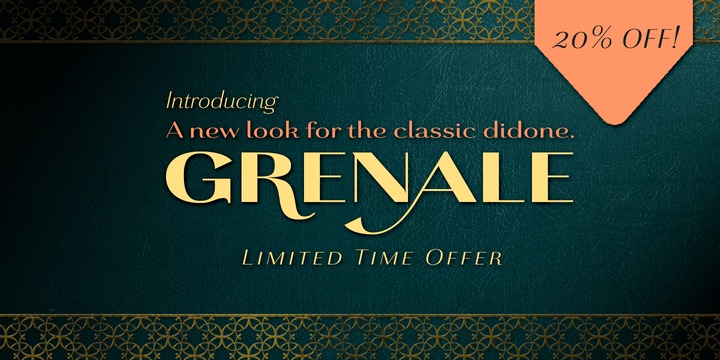 What is the Grenale™ font?

The elegant Grenale brings a new look to the classic didone. This shimmering sans-serif family with
its mild deco shades alters the typical serifs and terminals of the classic style to form a gracefully eye-catching, high-contrast font.
While high-contrast, sans serif forms tend to disappear in the copy, Grenale’s meticulously designed features exhibit proper balance in the spacing and in the thorough improvements of its contours.
The rigorous consideration given these details leaves a delicate typeface that doesn’t get washed
out in certain applications. Its pure, polished, geometric structure has a glamorous sensitivity,
drawing heavily from the inspiration of the haute couture influence. More…
Grenale’s thin weights are simple but vibrant–elegant forms that naturally lend themselves to high fashion journals, high-end branding, and other five star applications. With added energy and power,
the thicker weights with their ink traps and optical compensation intensify the gravitas for a statelier
look to the graceful forms. Grenale’s upright versions are also matched by optically adjusted italics, intentionally tailored to maintain their counterparts’ sharp edge, causing the font’s fierce characteristics to shine through the refined face.
The typeface also includes a wide variety of alternates that can be accessed in any OpenType-enabled application. The stylish features include a large group of alternates, swashes, and meticulously precise details with teardrop terminals and alternate titling caps to accessorize the font. Also included are capital swash alternates, old style figures, and small caps. Take a look at the informative PDF brochure to see these features in action. OpenType enabled applications such as the Adobe suite or Quark can take full advantage of the automatic replacing ligatures and alternates. This family also offers the glyphs to support a wide range of languages.
It’s time to think high-class. Graceful and confident, Grenale’s carefully crafted features transfer pleasantly to each page with elegant charm. With its variety of alternate glyphs and its high, classy contrast, this five star font is a great option for bringing a more refined look to your work.
Production assistance for Grenale provided from Lucas Azevedo and iKern.

Here is a preview of how Grenale™ will look. For more previews using your own text as an example, click here.

No,Grenale™ is not free to download. You will need to pay for it I'm afraid. Almost every font that we list on HighFonts.com is a paid-for, premium font. We do have a Free Fonts section where we list free fonts that you can download. There is no point trying to find a free download of Grenale™ so please don't waste your time looking.

It is highly unlikely that you'll be able to find Grenale™ for free. There's a lot of websites that will say "Free Download" but these are just attempts to get you to click on a link which will either take you to an ad landing page or you risk getting viruses on your computer. In the rare occasion that you do find a free download for Grenale™ remember that it's illegal to use a font if you didn't pay for it!

If you really want Grenale™ and you want to truly own it the legal and safe way, then click here to visit the download and purchase page on MyFonts.com. Here you will be able to obtain the proper license. The designer and publisher deserves to be paid for their work, as they have put in the hours and the creativity to produce such an amazing font. Good luck with your purchase and future use of this font. :)