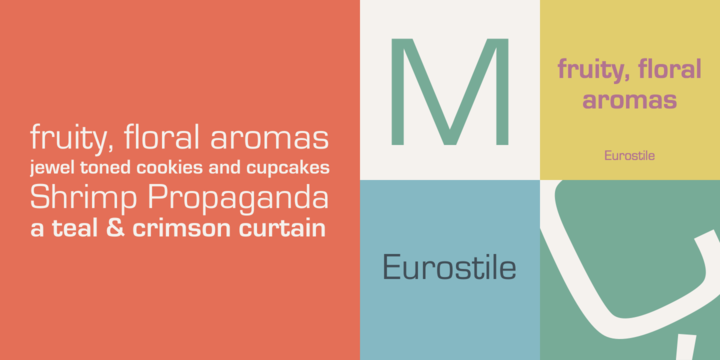 What is the Eurostile® font?

Eurostile was originally produced in 1962 by the Nebiolo foundry as a more seasoned and complete version of its earlier Microgramma typeface, a caps-only design by Alessandro Butti used to label the foundry catalog. The family reflects the forward-looking spirit of the 1950s and 1960s. Its wide forms with squared curves are reminiscent of the shapes of cathode ray tube televisions, or the windows of airplanes and high-speed passenger railcars. By these associations, but also by its own careful composition, Eurostile has sustained the ability to give copy a dynamic, technological feel. It works well for headlines and short bits of text, poster work, and, you know, on the side of space-going vehicles. The family spans three widths: Condensed, normal, and Extended, in three weights each. Its normal width includes companion obliques. Adding additional versatility, an outline style also accompanies the family.

Here is a preview of how Eurostile® will look. For more previews using your own text as an example, click here.

No,Eurostile® is not free to download. You will need to pay for it I'm afraid. Almost every font that we list on HighFonts.com is a paid-for, premium font. We do have a Free Fonts section where we list free fonts that you can download. There is no point trying to find a free download of Eurostile® so please don't waste your time looking.

It is highly unlikely that you'll be able to find Eurostile® for free. There's a lot of websites that will say "Free Download" but these are just attempts to get you to click on a link which will either take you to an ad landing page or you risk getting viruses on your computer. In the rare occasion that you do find a free download for Eurostile® remember that it's illegal to use a font if you didn't pay for it!

If you really want Eurostile® and you want to truly own it the legal and safe way, then click here to visit the download and purchase page on MyFonts.com. Here you will be able to obtain the proper license. The designer and publisher deserves to be paid for their work, as they have put in the hours and the creativity to produce such an amazing font. Good luck with your purchase and future use of this font. :)