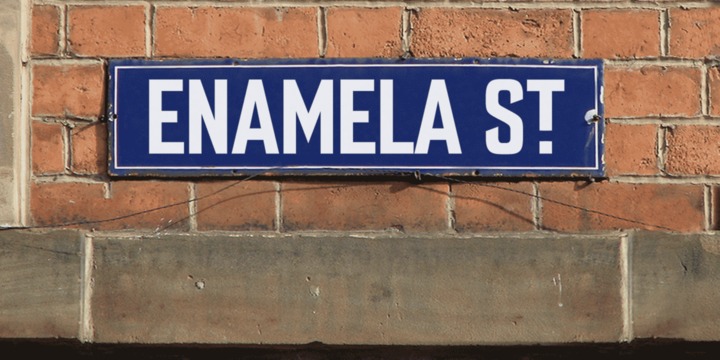 What is the Enamela font?

ENAMELA (rhymes with Pamela) is based on condensed sans serif lettering found on vitreous enamel signage dating from the Victorian era and widely used in Britain for road signs, Post Office signs, the plates on James Ludlow wall postboxes, railway signs and direction signs, as well as for circular Automobile Association wayfinding plaques throughout the first half of the twentieth century. In addition to the Medium and Bold weights found on old enamel signs, a new Regular weight and the addition of a convincingly classic lowercase to match the original capitals, make Enamela Condensed a flexible and highly usable typeface. Each weight has a complementary and complimentary faux italic. More…
The roots of the lettering date back to Victorian times; a Cherry Blossom Boot Polish enamel advertising sign on the Advertising Antiques website is estimated to date from 1880. Between 1908 and 1915 the lettering was used on ‘bull’s eye’ station signs for the London Underground up to the introduction of Johnston’s Underground type.
I initially saw a similarity to the Charles Wright car registration plate font (see K-Type Mandatory) with its quirky terminals stemming from the compression of geometric type. Alan Brignull noted the similarity to a Victorian wood type called Runic, though the terminals on C, G, J and S slope in the opposite direction. The precise origin and identity of the typeface continues to prove elusive.
In search of an existing digital font, I sought the help of Luc Devroye in Montreal who identified the closest match as Czech designer František Storm’s Enamelplate D, similarly condensed with the correctly sloping terminals. However, many characters differ substantially from those in local source material, perhaps indicating that continental European enamel lettering varied from its British counterpart, though even in Britain a fair degree of variation can be observed, draughtsmen evidently feeling free to amend the basic letter shapes and exercise individual taste. The middle diagonals of an uppercase M usually extended down to the baseline, becoming rather heavy and congested, but some draughtsmen started following the Gill /Johnston example of a higher pointed vertex, and this more elegant option has been chosen for the new Enamela typeface, though the alternative M with lower vertex is also provided at the Alt-M (µ) keystroke on a Mac, or Alt-0181 on Windows. While some designers preferred a plain vertical throat on the G, others added a crosspiece to help distinguish it from a C, and the latter is the form chosen for the Enamela fonts. However, the G without the horizontal is also present, assigned Unicode FF27 (full width capital G).

Here is a preview of how Enamela will look. For more previews using your own text as an example, click here.


Is Enamela A free font? Is Enamela Free to Download?

No,Enamela is not free to download. You will need to pay for it I'm afraid. Almost every font that we list on HighFonts.com is a paid-for, premium font. We do have a Free Fonts section where we list free fonts that you can download. There is no point trying to find a free download of Enamela so please don't waste your time looking.

It is highly unlikely that you'll be able to find Enamela for free. There's a lot of websites that will say "Free Download" but these are just attempts to get you to click on a link which will either take you to an ad landing page or you risk getting viruses on your computer. In the rare occasion that you do find a free download for Enamela remember that it's illegal to use a font if you didn't pay for it!

If you really want Enamela and you want to truly own it the legal and safe way, then click here to visit the download and purchase page on MyFonts.com. Here you will be able to obtain the proper license. The designer and publisher deserves to be paid for their work, as they have put in the hours and the creativity to produce such an amazing font. Good luck with your purchase and future use of this font. :)