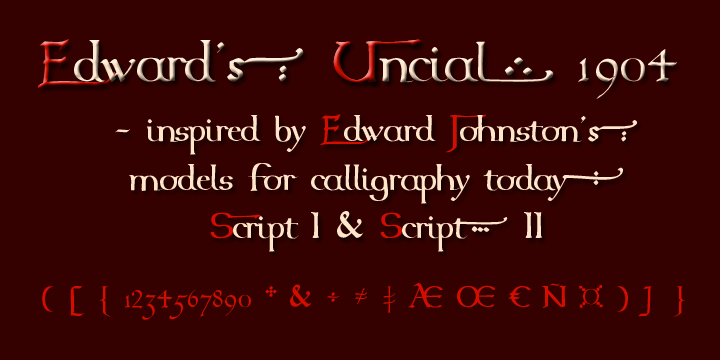 It’s 100 years since Edward Johnston proposed the two mediaeval styles uncial and half-uncial to reintroduce handwriting as an enjoyable experience of beauty – calligraphy. Here his hand-written forms are adapted for print and screen, and extended for other languages; there are swash forms of beginning capitals and final small letters: and ornaments coming in a separate font soon! More…
In the greater world of today, Edward Johnston is perhaps known mostly for his highly effective but perhaps rather unexciting font for the London Underground; but in calligraphic circles he is given the credit for having more-or-less single-handedly started the 20thC movement for Italic hand-writing, with one book, which was first published in 1906, reprinted dozens of times, and indeed is still in print today – Writing and Illuminating, and Lettering.
He gives there two alphabets which he proposes should be used together as a model for a basic repertoire – an uncial and half-uncial used together as a modern upper and lower case respectively: of course, it was the renaissance alphabets which later became the basis for 20thC calligraphy, rather than these early mediaeval models, but they introduced the idea of a broad nib generating thick and thin strokes, rather than the point used for copperplate. Edward Johnston drew the proofs of the two script on different plates, and they are printed on different pages in the book, as models for handwriting: they are really too different from one another to use them together as a font just as they are. But with some adjusting, the result is rather delightful alternative to, on the one hand, historically-authentic uncials, and on the other, the ultra-smooth and regular modern interpretations which most fonts today offer.
Alongside the regular font, there is a version with swash capitals to start words off with, and swash lower-cases, mostly to end short lines with, though b f k p q can work with letters after them too: to appear under Windows as a single family, this is called ‘Italic’ in the font menu.
One interesting detail concerns the numbers, for which Edward Johnston suggests that – after a 0 and a 1 which are as high and low as an ‘x’, neither ascending nor descending – the even numbers might ascend while the odd numbers descend. This makes for a refreshing contrast with today’s implementation of these ‘old-style numbers’, where 2 is ‘x’-height like 0 and 1, and 4 descends with its neighbours 3 and 5, rather than ascends like the other even numbers 6 and 8.
Edward Johnston gave a model of a decorated capital O with a patterned background: here the two elements are separated, so you can use the background with various colours and with any of the capitals. Or indeed capitals from other fonts.

Here is a preview of how Edward’s Uncial 1904 will look. For more previews using your own text as an example, click here.

No,Edward's Uncial 1904 is not free to download. You will need to pay for it I'm afraid. Almost every font that we list on HighFonts.com is a paid-for, premium font. We do have a Free Fonts section where we list free fonts that you can download. There is no point trying to find a free download of Edward's Uncial 1904 so please don't waste your time looking.

It is highly unlikely that you'll be able to find Edward's Uncial 1904 for free. There's a lot of websites that will say "Free Download" but these are just attempts to get you to click on a link which will either take you to an ad landing page or you risk getting viruses on your computer. In the rare occasion that you do find a free download for Edward's Uncial 1904 remember that it's illegal to use a font if you didn't pay for it!

If you really want Edward's Uncial 1904 and you want to truly own it the legal and safe way, then click here to visit the download and purchase page on MyFonts.com. Here you will be able to obtain the proper license. The designer and publisher deserves to be paid for their work, as they have put in the hours and the creativity to produce such an amazing font. Good luck with your purchase and future use of this font. :)