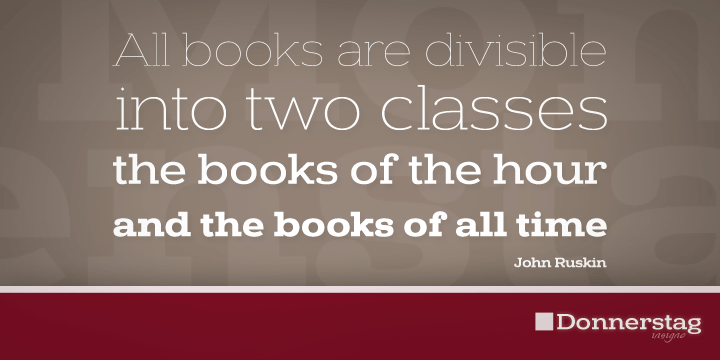 What is the Donnerstag™ font?

Donnerstag is an extended slab serif and a new companion to insigne’s Montag, Dienstag and Mittwoch typefaces. Donnerstag conveys power and personality with its strong slab letterforms and ball terminals.
Donnerstag’s seven different weights give it a great deal of versatility, from its beefy and masculine black weight to the delicate and feminine hairline. Because of Donnerstag’s width, this typeface is best used for logotypes, headlines or short blocks of text. More…
Donnerstag includes many useful OpenType features, including a set of upright italic swash alternates, ligatures, small caps, fractions and old style figures, alternates for the ball terminals and simplified characters for titling.
OpenType-capable applications such as the Adobe suite or Quark can take full advantage of automatically replacing ligatures and alternates. This family also includes the glyphs to support a wide range of latin based languages.
For complementary companions, be sure to check out the rest of the typeface super family, also available from insigne.

Here is a preview of how Donnerstag™ will look. For more previews using your own text as an example, click here.

No,Donnerstag™ is not free to download. You will need to pay for it I'm afraid. Almost every font that we list on HighFonts.com is a paid-for, premium font. We do have a Free Fonts section where we list free fonts that you can download. There is no point trying to find a free download of Donnerstag™ so please don't waste your time looking.

It is highly unlikely that you'll be able to find Donnerstag™ for free. There's a lot of websites that will say "Free Download" but these are just attempts to get you to click on a link which will either take you to an ad landing page or you risk getting viruses on your computer. In the rare occasion that you do find a free download for Donnerstag™ remember that it's illegal to use a font if you didn't pay for it!

If you really want Donnerstag™ and you want to truly own it the legal and safe way, then click here to visit the download and purchase page on MyFonts.com. Here you will be able to obtain the proper license. The designer and publisher deserves to be paid for their work, as they have put in the hours and the creativity to produce such an amazing font. Good luck with your purchase and future use of this font. :)