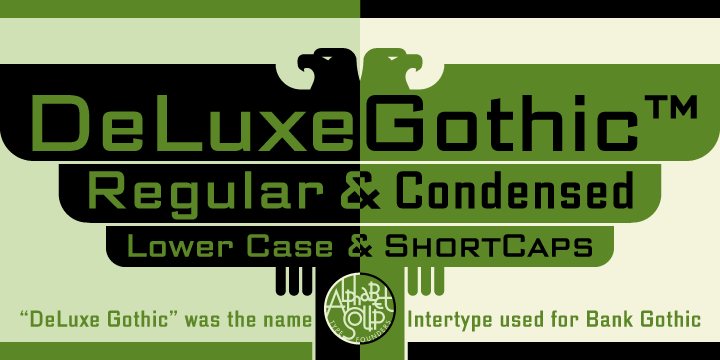 What is the DeLuxe Gothic™ font?

Bank Gothic being a longtime font favorite of his, Michael Doret was always disappointed that Morris Fuller Benton’s classic didn’t contain any lowercase characters. So he set out to remedy that by designing his all new DeLuxe Gothic, hoping that his new design would live up to the high standards of this former giant of the font world. More…
He felt that naming his font “DeLuxe Gothic” would be appropriate, as that was the name that the Intertype Corporation used for their version of Bank Gothic back in the early days of the 20th Century. He also decided to keep the original shortcaps for those who’d want to keep the traditional look, providing options for setting text in upper and lowercase, all caps, or in caps and shortcaps. This 21st Century square sans serif font is available in both Regular and Condensed versions.

Here is a preview of how DeLuxe Gothic™ will look. For more previews using your own text as an example, click here.

No,DeLuxe Gothic™ is not free to download. You will need to pay for it I'm afraid. Almost every font that we list on HighFonts.com is a paid-for, premium font. We do have a Free Fonts section where we list free fonts that you can download. There is no point trying to find a free download of DeLuxe Gothic™ so please don't waste your time looking.

It is highly unlikely that you'll be able to find DeLuxe Gothic™ for free. There's a lot of websites that will say "Free Download" but these are just attempts to get you to click on a link which will either take you to an ad landing page or you risk getting viruses on your computer. In the rare occasion that you do find a free download for DeLuxe Gothic™ remember that it's illegal to use a font if you didn't pay for it!

If you really want DeLuxe Gothic™ and you want to truly own it the legal and safe way, then click here to visit the download and purchase page on MyFonts.com. Here you will be able to obtain the proper license. The designer and publisher deserves to be paid for their work, as they have put in the hours and the creativity to produce such an amazing font. Good luck with your purchase and future use of this font. :)