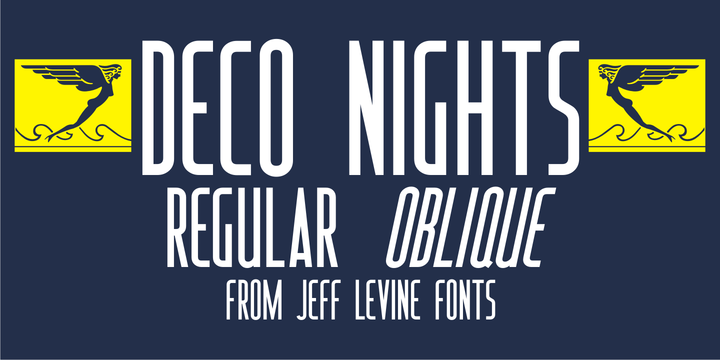 What is the Deco Nights JNL font?

Sheet music for the tune “Put Your Arms Around Me Honey” (from the 1937 film “Coney Island” starring Betty Grable, George Montgomery and Cesar Romero) has the song title hand lettered in a condensed Art Deco sans serif design.
This became the basis for Deco Nights JNL, which is available in both regular and oblique versions. More…
For trivia buffs, the song was written by Junie McCree and Albert Von Tilzer and was first featured in the Broadway show “Madame Sherry” in 1910 and was revived for a second time in the 1949 Judy Garland -Van Johnson film “In the Good Old Summertime”.

Here is a preview of how Deco Nights JNL will look. For more previews using your own text as an example, click here.

No,Deco Nights JNL is not free to download. You will need to pay for it I'm afraid. Almost every font that we list on HighFonts.com is a paid-for, premium font. We do have a Free Fonts section where we list free fonts that you can download. There is no point trying to find a free download of Deco Nights JNL so please don't waste your time looking.

It is highly unlikely that you'll be able to find Deco Nights JNL for free. There's a lot of websites that will say "Free Download" but these are just attempts to get you to click on a link which will either take you to an ad landing page or you risk getting viruses on your computer. In the rare occasion that you do find a free download for Deco Nights JNL remember that it's illegal to use a font if you didn't pay for it!

If you really want Deco Nights JNL and you want to truly own it the legal and safe way, then click here to visit the download and purchase page on MyFonts.com. Here you will be able to obtain the proper license. The designer and publisher deserves to be paid for their work, as they have put in the hours and the creativity to produce such an amazing font. Good luck with your purchase and future use of this font. :)