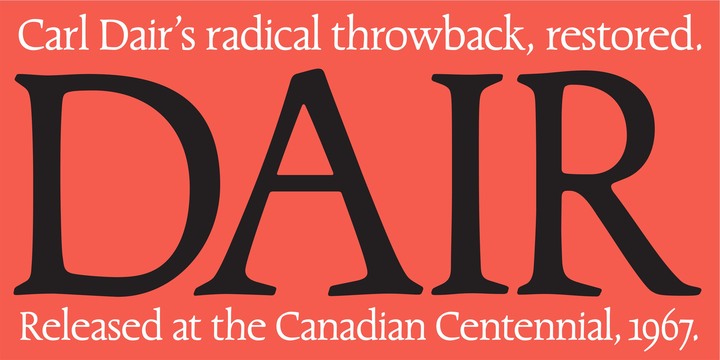 What is the Dair® font?

Designer: Carl Dair
Revived by: Nick Shinn
A restoration of the first Canadian-designed typeface, which was completed by Carl Dair in 1967 and named after 16th century explorer Jacques Cartier, who mapped the Gulf of St. Lawrence in the 1530s.
The design is characterized by ascenders which tower dramatically above the capitals, by condensed italic minuscules inclined at a mere 6 degrees—and by its profound empathy for the core principles of the roman type form, originating over 500 years ago. More…
The revival was made from a printed example of the face, in the The Magic Fiddler, and Other Legends of French Canada by Claude Aubry, published in 1968.
Dair 67 and Dair 67 Italic will create facsimiles of the original fonts’ typesetting.
Dair and Dair Italic are fully-featured 21st century fonts.
Dair TBNT is precisely fitted and kerned for the Tight But Not Touching style of the 1970s (notably different from both Optical kerning and tracked-in Dair).

Here is a preview of how Dair® will look. For more previews using your own text as an example, click here.


Is Dair® A free font? Is Dair® Free to Download?

No,Dair® is not free to download. You will need to pay for it I'm afraid. Almost every font that we list on HighFonts.com is a paid-for, premium font. We do have a Free Fonts section where we list free fonts that you can download. There is no point trying to find a free download of Dair® so please don't waste your time looking.

It is highly unlikely that you'll be able to find Dair® for free. There's a lot of websites that will say "Free Download" but these are just attempts to get you to click on a link which will either take you to an ad landing page or you risk getting viruses on your computer. In the rare occasion that you do find a free download for Dair® remember that it's illegal to use a font if you didn't pay for it!

If you really want Dair® and you want to truly own it the legal and safe way, then click here to visit the download and purchase page on MyFonts.com. Here you will be able to obtain the proper license. The designer and publisher deserves to be paid for their work, as they have put in the hours and the creativity to produce such an amazing font. Good luck with your purchase and future use of this font. :)