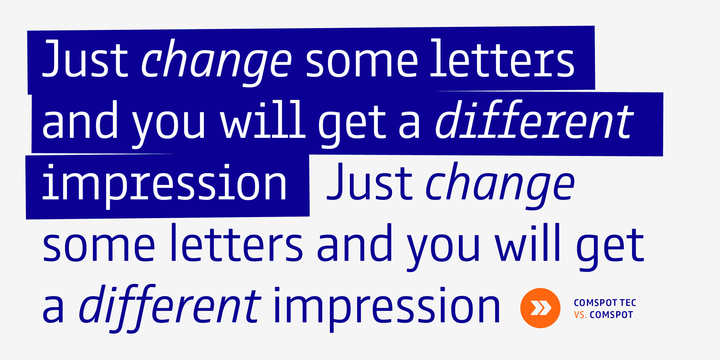 What is the Comspot font?

Comspot is a rounded, typewriter-flavoured font family with a human touch. Originally designed as a custom typeface Comspot’s nine weights — razor-thin hairline to ultra black — and 14 stylistic alternates fulfil every need, from extended to display text. More…
Comspot’s typewriter flavour is strongest in letters like f and t, with their wide middle strokes, and the tighter design of w, M and W, with their repositioned centre joints. Glyphs that would normally cause trouble in monospaced fonts have been carefully balanced for text, and have easily-accessed alternates to emphasise the font’s typewriter vibe and bring more character to display settings. Where the roman mixes in monospaced forms, the italic finds a balance between real italic and sloped roman shapes. The subtle rounding of Comspot’s corners increases from Hairline to Ultra, producing fine and elegant light styles and humane heavy weights.
Comspot supports the full Adobe Latin 3+ character set and thus some 90 languages. Along with using Stylistic Set 01 to unleash glyphs with an extra technical typewriter flavour, Comspot offers a lot of typographic features: tabular figures, fractions, superscript or even contextual alternates. Also set of individual DIY-Icons like a great big wood axe or a warning triangle can introduce a fun factor to your projects.
Any questions? … Say [email protected]

Here is a preview of how Comspot will look. For more previews using your own text as an example, click here.


Is Comspot A free font? Is Comspot Free to Download?

No,Comspot is not free to download. You will need to pay for it I'm afraid. Almost every font that we list on HighFonts.com is a paid-for, premium font. We do have a Free Fonts section where we list free fonts that you can download. There is no point trying to find a free download of Comspot so please don't waste your time looking.

It is highly unlikely that you'll be able to find Comspot for free. There's a lot of websites that will say "Free Download" but these are just attempts to get you to click on a link which will either take you to an ad landing page or you risk getting viruses on your computer. In the rare occasion that you do find a free download for Comspot remember that it's illegal to use a font if you didn't pay for it!

If you really want Comspot and you want to truly own it the legal and safe way, then click here to visit the download and purchase page on MyFonts.com. Here you will be able to obtain the proper license. The designer and publisher deserves to be paid for their work, as they have put in the hours and the creativity to produce such an amazing font. Good luck with your purchase and future use of this font. :)