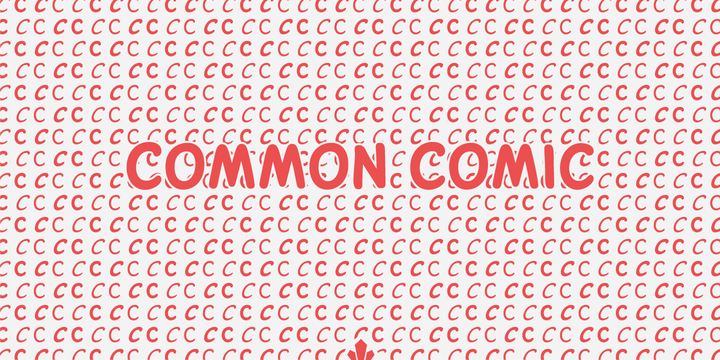 What is the Common Comic™ font?

The Common Comic volume is the fifth in Canada Type’s ever-growing series of comic book fonts, which really is the expression of Patrick Griffin’s continued obsession with the genre. Common Comic joins Collector Comic, Captain Comic, Caper Comic, and Classic Comic, all popular fonts in their own right.
This set was made for information-heavy comic balloon text use. The forms were constrcuted with a slightly condensed individual build, without sacrificing the clarity, legibility and scalability of the overall setting. Meticulously scrutinized and tested outlines expand the versatility of this set to also cover non-comic text and display applications. More…
Common Comic is two very interchangeable sets of caps are available in regular and bold weights, with italic counterparts, all in one style-linked and affordable package. Each of the four fonts come with a glyphset of over 370 characters, quite a few alternates, and support for the majority of Latin-based languages.

Here is a preview of how Common Comic™ will look. For more previews using your own text as an example, click here.

No,Common Comic™ is not free to download. You will need to pay for it I'm afraid. Almost every font that we list on HighFonts.com is a paid-for, premium font. We do have a Free Fonts section where we list free fonts that you can download. There is no point trying to find a free download of Common Comic™ so please don't waste your time looking.

It is highly unlikely that you'll be able to find Common Comic™ for free. There's a lot of websites that will say "Free Download" but these are just attempts to get you to click on a link which will either take you to an ad landing page or you risk getting viruses on your computer. In the rare occasion that you do find a free download for Common Comic™ remember that it's illegal to use a font if you didn't pay for it!

If you really want Common Comic™ and you want to truly own it the legal and safe way, then click here to visit the download and purchase page on MyFonts.com. Here you will be able to obtain the proper license. The designer and publisher deserves to be paid for their work, as they have put in the hours and the creativity to produce such an amazing font. Good luck with your purchase and future use of this font. :)