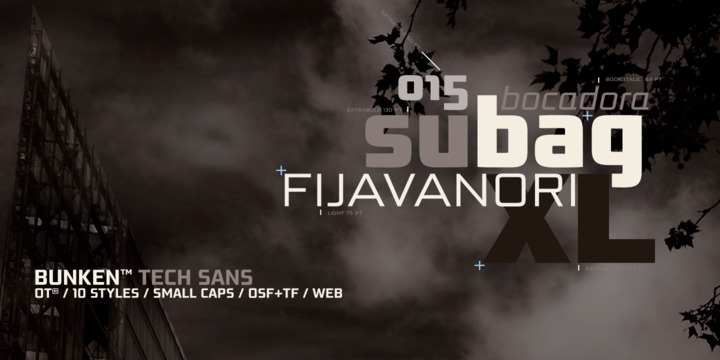 What is the Bunken Tech Sans font?

The Bunken Tech Sans superfamily: A reminiscence of constructed fonts of the modern age designed with considerably cleaner forms.
Bunken Tech Sans follows in the best tradition of the straight-lined and somewhat angular structures of its predecessors while offering a much more open and mild design.
The shapes of the letters are therefore reduced to the most essential elements: The spurs on a, b, n and other lower case letters occur just as little as decorative or style details, the lightly rounded inside edges are more pleasing to the eye than certain historic role models and make for a harmonic, flowing style. More…
Use
In particular Bunken Tech Sans stands out as an easy, distinctive headline font with its straight-lined, technical design. Open counters and large x-height make it equally suited for use in shorter texts.
It is also perfectly complemented by Bunken Sans or Bunken Slab in longer texts (available soon).
Features
Available in 10 styles with widths ranging from Light to ExtraBold with associated Italics. All of the styles are very extensive: Support for at least 58 languages, Small Capitals, 9 number sets (e.g. Lining, Oldstyle, Tabular and Small Cap Figures), ligatures, alternate characters, numerous Opentype functions, and lots of other small features that make it more pleasant to work with the font on a daily basis as well as fulfilling typographic desires. Each style contains more than 870 characters!
Each style is available in a professional (Pro) and standard (Std) edition with a reduced range of functions. (Language support, OpenType features and number of glyphs). Details can be found on the respective pages.
Bunken Tech Sans is part of the Bunken Tech superfamily and is available in Condensed, Normal and Wide.
Also of interest:
The slab serif variation Bunken Tech Slab
Features in Detail:
12 Weights:
-Light
-Book
-Medium
-SemiBold
-Bold
-ExtraBold
and corresponding Italics
3 Widths:
-Condensed
-Normal
-Wide
Alternate Characters: A, E, F, L, S, e, f, t, s, y, etc.
Small Capitals
5 Sets of Figures:
-Lining Figures
-Old Style Figures
-Tabfigures
-Old Style Tabfigures
-Small Cap Figures
Automatic Ordinals
Automatic Fractions
Extended Language Support
and more…

Here is a preview of how Bunken Tech Sans will look. For more previews using your own text as an example, click here.

No,Bunken Tech Sans is not free to download. You will need to pay for it I'm afraid. Almost every font that we list on HighFonts.com is a paid-for, premium font. We do have a Free Fonts section where we list free fonts that you can download. There is no point trying to find a free download of Bunken Tech Sans so please don't waste your time looking.

It is highly unlikely that you'll be able to find Bunken Tech Sans for free. There's a lot of websites that will say "Free Download" but these are just attempts to get you to click on a link which will either take you to an ad landing page or you risk getting viruses on your computer. In the rare occasion that you do find a free download for Bunken Tech Sans remember that it's illegal to use a font if you didn't pay for it!

If you really want Bunken Tech Sans and you want to truly own it the legal and safe way, then click here to visit the download and purchase page on MyFonts.com. Here you will be able to obtain the proper license. The designer and publisher deserves to be paid for their work, as they have put in the hours and the creativity to produce such an amazing font. Good luck with your purchase and future use of this font. :)