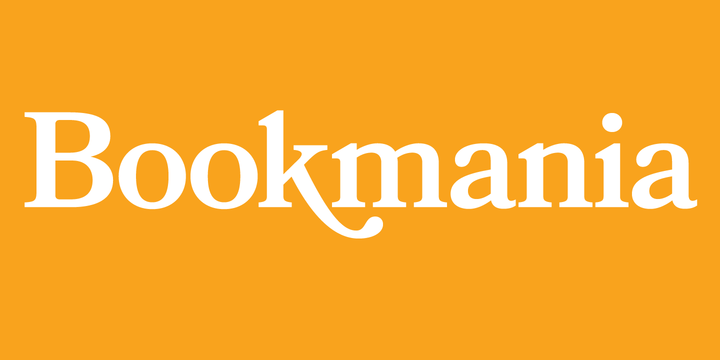 What is the Bookmania™ font?

Bookmania (2011) is a revival of Bookman Oldstyle (1901) and the Bookmans of the 1960s, but with all the features you would expect in a modern digital font family.
Feature Summary: More…
5 weights: Light, Regular, Semibold, Bold, and Black
Matching italics for all weights
Matching small caps for all weights*
Over 680 swash characters*
35 optional ligatures*
Lining and old style figures (both proportional and tabular)*
Full “f” ligature set*
Alternate characters*
Automatic fractions*
Automatic ordinals*
Extended language support (Unicode support required), including all the swash and alternate characters
Important: Features of Bookmania marked with an asterisk (*) require OpenType advanced typography support in order to work (swashes, especially). It works best with applications like Adobe Creative Suite and QuarkXPress. In other applications, features may be inaccessible. A “glyph” palette or window is required to access all but the basic swash variants. Check your application’s user guide for availability of these features.

Here is a preview of how Bookmania™ will look. For more previews using your own text as an example, click here.

No,Bookmania™ is not free to download. You will need to pay for it I'm afraid. Almost every font that we list on HighFonts.com is a paid-for, premium font. We do have a Free Fonts section where we list free fonts that you can download. There is no point trying to find a free download of Bookmania™ so please don't waste your time looking.

It is highly unlikely that you'll be able to find Bookmania™ for free. There's a lot of websites that will say "Free Download" but these are just attempts to get you to click on a link which will either take you to an ad landing page or you risk getting viruses on your computer. In the rare occasion that you do find a free download for Bookmania™ remember that it's illegal to use a font if you didn't pay for it!

If you really want Bookmania™ and you want to truly own it the legal and safe way, then click here to visit the download and purchase page on MyFonts.com. Here you will be able to obtain the proper license. The designer and publisher deserves to be paid for their work, as they have put in the hours and the creativity to produce such an amazing font. Good luck with your purchase and future use of this font. :)