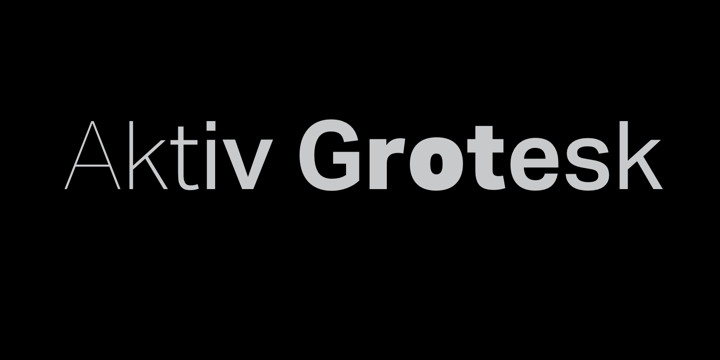 What is the Aktiv Grotesk font?

The Aktiv Grotesk family is a 21st century interpretation of a grotesque sans typeface. It takes an authoritative but neutral position, lending your message support, without overpowering it. More…
Grotesque fonts have been hugely popular over the last fifty years, with designers and font-users choosing them for their neutrality, contemporary feel, utilitarianism, and seriousness; these are fonts which can be applied in a broad range of contexts and media. Aktiv Grotesk is therefore an ideal choice for branding exercises which require a diverse use of type, or where quiet authority is needed. Unlike many other grotesque font families, Aktiv Grotesk was specifically designed to stay true to the grotesque tradition. You will find that Aktiv Grotesk pairs well with robust serif fonts, such as the Cordale, King’s Caslon, and Lexia font families.
The Standard Edition font includes a complete Latin Extended A character set, but please see the Corporate Edition for a character set including Latin, Greek and Cyrillic alphabets.

Here is a preview of how Aktiv Grotesk will look. For more previews using your own text as an example, click here.

No,Aktiv Grotesk is not free to download. You will need to pay for it I'm afraid. Almost every font that we list on HighFonts.com is a paid-for, premium font. We do have a Free Fonts section where we list free fonts that you can download. There is no point trying to find a free download of Aktiv Grotesk so please don't waste your time looking.

It is highly unlikely that you'll be able to find Aktiv Grotesk for free. There's a lot of websites that will say "Free Download" but these are just attempts to get you to click on a link which will either take you to an ad landing page or you risk getting viruses on your computer. In the rare occasion that you do find a free download for Aktiv Grotesk remember that it's illegal to use a font if you didn't pay for it!

If you really want Aktiv Grotesk and you want to truly own it the legal and safe way, then click here to visit the download and purchase page on MyFonts.com. Here you will be able to obtain the proper license. The designer and publisher deserves to be paid for their work, as they have put in the hours and the creativity to produce such an amazing font. Good luck with your purchase and future use of this font. :)