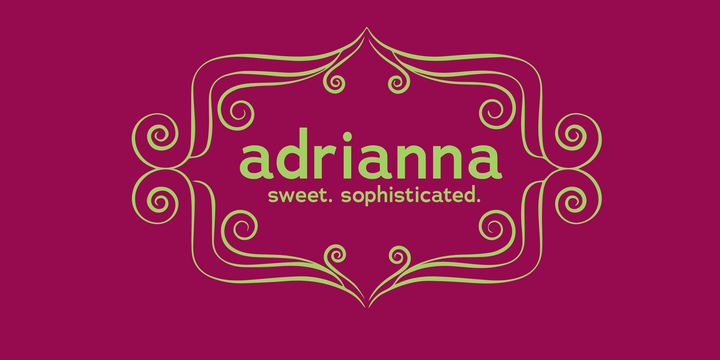 What is the Adrianna font?

Adrianna is a fashionable yet restrained sans-serif font family for sophisticated designs. It’s a smart and versatile family of fonts, comprised of 30 styles across a range of three widths. The Regular width is a plain and clear heavy-lifting font. The Extended variety is meant to look good on HDTV and other modern wide output media. And the proportions of the Condensed makes it looks especially good when seen on a smartphone.
It’s a legible and direct type family. Ranging in 5 weights (plus italics) from Light to Extrabold in each width style, Adrianna has enough flavors to allow the finicky designer a broad typographic palette to work with. More…
Inspired by the great sans serif fonts of the 20th century, Chank challenged himself to create a technical font family that is considerably more conservative than his signature display faces. As a quality control for this new direction, he solicited expert advice from award-winning type & design experts. Working from their critiques, Adrianna has been in development for almost 10 years now. The result is a competent, charming new “invisible” sans for the new media of the new century.
OpenType versions have a few bells and baubles, like some smallcaps and ornamental alternates. Purchase it from MyFonts and you’ll get TrueType format in your download as well.
Also available as web type, too, of course.

Here is a preview of how Adrianna will look. For more previews using your own text as an example, click here.

No,Adrianna is not free to download. You will need to pay for it I'm afraid. Almost every font that we list on HighFonts.com is a paid-for, premium font. We do have a Free Fonts section where we list free fonts that you can download. There is no point trying to find a free download of Adrianna so please don't waste your time looking.

It is highly unlikely that you'll be able to find Adrianna for free. There's a lot of websites that will say "Free Download" but these are just attempts to get you to click on a link which will either take you to an ad landing page or you risk getting viruses on your computer. In the rare occasion that you do find a free download for Adrianna remember that it's illegal to use a font if you didn't pay for it!

If you really want Adrianna and you want to truly own it the legal and safe way, then click here to visit the download and purchase page on MyFonts.com. Here you will be able to obtain the proper license. The designer and publisher deserves to be paid for their work, as they have put in the hours and the creativity to produce such an amazing font. Good luck with your purchase and future use of this font. :)